There are very few aspects of Barcelona that I dislike. I love the beaches, especially in the summertime when the water is as warm as a heated pool. I adore the architecture from Gothic to Gaudi, which reaches back to Roman times and still dazzles me after many years living here. It’s also a pleasure to walk down the streets and hear a jumble of languages representing numerous cultures.

And the food and wine? Don’t even get me started on how much I love it!

But no place is perfect. That’s just not how life works. There’s a difficult side to even the sweetest destination. We’ve talked about a few of the negative aspects of Barcelona before, but I believe that the most annoying aspect of Barcelona is the petty theft and occasionally more aggressive forms of robbery that take place.

However, don’t let these minor safety issues discourage you from visiting this wonderful city. Instead, keep safe with these tips based on years of living in Barcelona.

Staying safe during your Barcelona vacation

I’ve never seen it happen, but I’ve heard of luggage thieves on the AEROBÚS, the bus that connects downtown Barcelona to the airport. You don’t necessarily need to sit with your bag between your legs, and in some cases that may be seen as impolite, especially if the bus is very full. There is a luggage rack on the AEROBÚS and your big bags should be stowed there.

My advice is to sit as close to the luggage rack as possible so that you can keep an eye on your belongings. Of course, laptop bags, purses and cameras should all go in your lap, not on the rack.

Never place your purse on the floor in a public place. If you are in a restaurant, your purse should be on your lap, not strung across the back of your chair. I’ve seen multiple robberies where a purse was slung over a chair or placed in an empty chair. The thief comes by your table running, snatches the purse and keeps going. You are too flabbergasted to react, plus you have a mouthful of patatas bravas, making it difficult to sound the alarm. You may try to run after him, but he’s faster, knows shortcuts and is long gone in seconds.

I did see this exact scenario go down in an outdoor eatery once. The victim screamed and three men jumped up from a neighboring table to run after the thief, eventually catching him and returning the purse. She was lucky. You might not have three track stars lunching beside you.

3. Be alert when shopping

You should keep an eye on your purse in clothing shops, too. For example, if you take off your jacket and purse in order to try on something without going into the dressing room, you’ll want to make sure that your purse is nestled snugly between your feet, not left unattended on a chair or on the floor. Thieves lurk in shops looking for an opportunity to snag a bag.

Some areas of the city are safer than others, especially at night. The safest zones are those with few tourists because crime follows the jet-lagged, unaccustomed traveler. The safest areas are L’Eixample and Gràcia. The least safe are El Raval and the Gothic Quarter.

This does not mean that you shouldn’t stay in El Raval or the Gothic Quarter. In fact, they are both vibrant hoods with some of the city’s top nightlife and restaurants. But if you choose to stay in these areas, you need to keep your wits about you or travel with friends.

Related: Is it safe to stay in the Gothic Quarter? 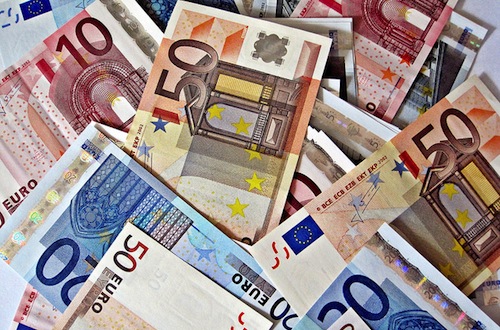 5. Be careful with cash

It’s best to take money out of an ATM in the middle of the day when lots of people are about. Avoid withdrawing large sums at night from desolate ATMs when no one is around. Also, avoid carrying lots of cash. Instead, leave most of your euros in the safe in your hotel room, and carry only what you need for the day. You will want to have some cash on hand because not all shops and restaurants in Barcelona accept credit cards.

Related: Getting money and using credit cards in Europe

Keep your bag in front of you like this rider on the Metro. Photo: Mathieu Marquer

6. Be aware of pickpockets on the Metro

Unfortunately, many a trusting tourist gets robbed on the Metro. The worst scenario is a packed car when everyone is squished up against everyone else. It’s hard to know in this situation if the tug you feel is a thief opening your bag or just the guy next to you trying to breathe in the cramped space. Keep your purse in your hands or held against your body and keep your wallet in your front pocket. If it’s really crowded, keep your hand on it.

Be aware when getting on or off the Metro. One trick thieves like to play is to grab a bag and hop off, just as the doors snap shut. They have your bag and all of your credit cards on the outside of the Metro, and you’re stuck inside. By the time you get to the next stop and find a police officer, the thief has enjoyed lunch on your Visa.

Another thing to keep in mind about the Metro is where and when you ride it. Late at night avoid the fringe lines. You will be fine at night on all lines in the city center, and there are usually many other revelers around. However, it does get a little wild on Fridays and Saturdays after midnight. Expect teens and college kids sipping booze, smoking joints and cigarettes, and singing off-key in a joyful haze. Mind you, none of this is legal (apart from the singing), but that hasn’t stopped anyone.

Before you run into the water, make sure someone is looking after your belongings. Photo: Mihai

7. Bring a buddy to the beach

The beach is best with a buddy. If you go alone you won’t have anyone to look after your stuff while you swim. If it’s a crowded day at the beach, ask the closest trustworthy-looking person to keep an eye on your things while you go for a dip. If you are sitting on the sand observing the waves, musing about the previous night’s wild Metro ride, make sure your bag and belongings are in front of you. Visitors make the mistake of setting their bag to their back, which makes an easy invitation for purse-snatchers.

Related: Best affordable hotels near the beach in Barcelona

In addition, be wary of someone who comes up and starts making small talk. Your first reaction should be to locate your bag, camera, belongings, etc. Thieves often work in twos: One distracts you with small talk while the other makes off with your stuff. The thief will keep you occupied until his friend is safely away, and then he will say his goodbyes.

Be aware at night when walking around less populated streets in Barcelona. Photo: Fernando García

8. Stick to the well-lit streets at night

El Raval and the Gothic Quarter are both fun hoods to spend a night out on the town. Bars, clubs, pubs and concert halls abound in both areas. However, El Raval can be dangerous for women alone, especially down side streets. I’ve known many women who have been harassed in El Raval, and quite a few others who have been robbed in the neighborhood. You are better off if you go out with a group of people, or at least with a friend. Stick to well-lit streets with lots of traffic.

In the Gothic Quarter the same rule about sticking to well-lit areas applies. Another consideration in the Gothic Quarter is just how confusing its winding lanes can be. It is easy to get lost in this hood, particularly in the dark after a few glasses of wine. Be aware of your surroundings, look for street signs and keep an eye out for suspicious characters.

9. Carry a copy of your passport

Make a copy of your passport and carry the photocopy around with you. Leave your passport, one of your credit cards, and extra cash in the safe in your hotel room. Remember that in some stores, like FNAC, you will need your physical passport in order to make a purchase with a credit card — but this is the exception, not the rule.

10. Armed robbery is very unusual but can happen

Most crime in Barcelona is of the petty theft variety. Muggings are rare. Guns are not common in Spain, and being held up at gunpoint is not at all common. However, it would be incorrect to assume that violent robbery does not happen. A friend of mine, who lived in El Born, was robbed violently twice in the course of six months. Understandably, these incidents upset him so much that he moved away from El Born. (And, of course, I have other friends who live in El Born, and nothing has ever happened to them.)

The thing is, El Born is a touristy area. There are many hotels and holiday apartments scattered around the hood and robbers know this. Both of the times my friend was robbed it was near his house on a side-street in El Born at night. The first time he was approached by a man with a broken bottle who demanded his wallet. He gave him what he had and the thief disappeared. The second time my friend had just returned from a long road trip to France. He had his luggage all about him on the street and had set down his laptop bag to look for his keys. He was standing right in front of his apartment. The thief came over with a knife, took his laptop bag, and then ran off as my friend screamed. It’s hard to say why my friend was a target, but I think it is probably because he looked like he was an unsuspecting tourist arriving late to a vacation rental.

These stories are infrequent, but that does not mean that they can’t happen. I think if someone comes up to you with a broken-off bottle and a deranged look in their eyes, the best thing to do is fork over your money. After all, you’ve got your back-up cash safely stowed away in the safe in your hotel room.

Remember: Barcelona is not dangerous

Despite my friend’s grim story, it’s important to stress that Barcelona is not a dangerous place. Let me just state that again: Barcelona is NOT dangerous.

Rife with petty theft, perhaps. Rife with kidnappers and gun-wielding drug lords, no. Plus, there are always lots of people about in downtown Barcelona. Safety comes in numbers. I feel much safer in Barcelona at 2 a.m. than I would in my hometown of Portland, Oregon, at the same time.

To have a trip free of pickpocketing and harassment, pay attention to where you are and where your belongings are at all times. Be vigilant and, at the end of your trip, you’ll leave town with both beautiful memories… and all your credit cards in your wallet.

Have a tip about how to stay safe in Barcelona? Share with us in the comments section below!