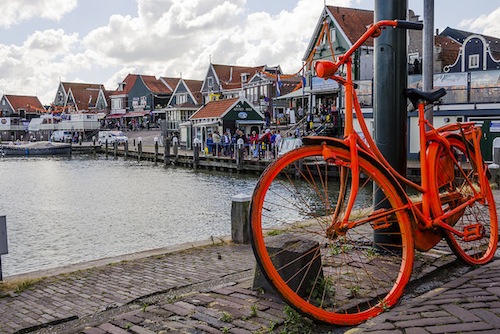 Amsterdam is a no brainer when visiting The Netherlands. It has tons of old-world charm and plenty of excellent budget hotels.

After a few days in this vibrant city, usually next on the list would be a day trip to Rotterdam, the Keukenhof flower garden or The Hague.

But staying in Amsterdam offers a variety of other day trips for Cheapos. Escape the crowds and mainstream sites by trying one of these five other options just a bike or train ride away.

The original town where New York City’s Harlem gets its name from is a quaint and cute Dutch city. A day can easily be spent wandering the old streets and canals of Haarlem that date back to the 1600s.

Admiring Grote Kerk square with a coffee on a terrace is a must. Corrie Ten Boomhouse is where a family hid hundreds of Jews during World War II. Today the house is a free museum with a 1940s feel that captures an important moment in Haarlem history. It also rarely has a wait (unlike the Anne Frank House). The Jopenkerk is a popular microbrewery inside an old church. Out-of-towners also come for live music at the Patronaat concert hall. Shopaholics love Haarlem for the endless dress boutiques and department stores, while foodies can appreciate the casual dining from organic vegetarian to Indian and Japanese.

Getting there: Trains from Amsterdam Centraal Station leave a few times an hour. The trip is about 20 minutes one way and a roundtrip ticket costs €9.

Related: A guide to visiting Haarlem on a budget

Rent a bike and head out to Volendam for a fun day trip. Photo: m fernandezh

Vollendam is a tiny place off the coast of the Islomeer lake with an adorable sailboat harbor. You can get there by an hour bike ride through the Dutch countryside with a couple of cheese farms and clog shops open to visit along the way. The small-town strip is dotted with souvenir shops, fried fish stands, ice cream parlors and authentic brown cafes.

Artists like Picasso and Renoir liked hanging out here, and nowadays it feels like a lazy Dutch seaside town. The traditional garb of bonnets and striped vests are usually spotted on a few locals, with a couple of dress-up photoshops in business as well. There is also a ferry here that goes to the Marken peninsula — a somewhat forgotten fishing village with traditional wooden houses and adorable lighthouse.

Getting there: Take the Amsterdam Central ferry across the Ij River to Amsterdam Noord. From there, follow bike path signs to Broek in Waterland (the original town Brooklyn is named after) and continue north to Monnickendam and then Northeast to Volendam. The green bike signs mean scenic, the red ones mean quickest. It takes about an hour each way. Want to bus it? Take number 316 from the north side of Amsterdam Centraal and get off at Katwoude, Hotel Volendam. The trip takes about 25 minutes, and a roundtrip ticket costs €6. 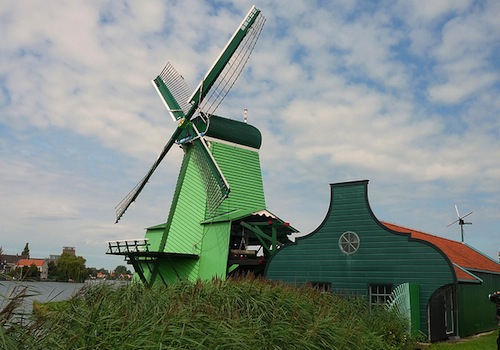 Zaanse Schans is a quaint district of Zandaam with a museum and windmills. Photo: Bert K

The town of Zandaam is famous for its scenic collection of six historic windmills, clusters houses and water landscapes. The windmills at Zaanse Schans here are leftover from its 17th-century heydays as a major milling area for oil, saw, dye and mustard. Most windmills are still open to the public, and some still sell what they make.

The village looks like it never left the 1600s. There is an old Albert Hein market (the major grocer of Amsterdam), a clog factory and a cheesemaker. Tourist buses love to drag visitors on board a day trip, but just go on your own to absorb the historic feel of Zandaam and its surroundings. It’s easier to dodge the crowds that way. Try to catch the ferry across the Zaan river, it’s a €5 ride running May to September and a great sightseeing perk.

Getting there: The trip is an hour bike ride each way, but it’s best to have a map for the loopy turns. Otherwise, local trains (aka Sprinter) going to Alkmaar from Amsterdam Centraal Station stop at Koog-Zaandijk are about a 35-minute ride. Hop off there and walk along the “dijk” towards the windmills (about 10 minutes). The cost of the train is €19.50 roundtrip. You can also get there if you purchase an Amsterdam & Region Day Ticket. 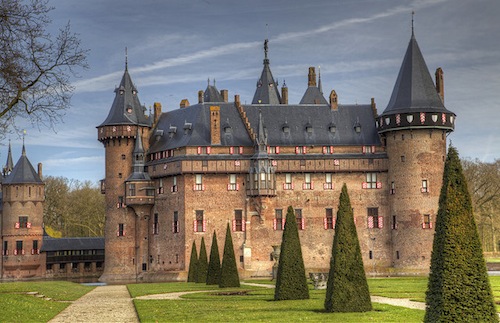 The gorgeous Castle De Haar is straight out of a fairy tale. Photo: Ryan Beck

One of the best perks about visiting Europe is all of the castles, and the Benelux region is full of them. Just outside of Utrecht is Castle De Haar, a beautiful place open for viewing and hanging around the lush gardens. The oldest parts of the foundation are from the early 1500s, but most of the castle you see today was built in the 1890s by the same architect who designed Amsterdam Centraal Station and the Rijksmuseum. The exterior is a beautiful garden of flowers and trees between a moat and small canal ways. Guided one-hour tours are the only way to see the inside. The Dutch family who owns this property have wined and dined celebrities such as Brigitte Bardot and Roger Moore during their heyday.

Castle details: The gardens are open daily 9 a.m. to 5 p.m., while the castle is open Mon.-Sun. 11 a.m. to 5 p.m. An adult ticket is €17, but if you just want to admire the castle from the outside and wander the gardens it’s only €6. More info at www.kasteeldehaar.nl

Getting there: Take a train from Amsterdam Centraal to Utrecht Central Station, and change trains to catch the Sprinter to Vleuten on platform 18 (train destination: Den Haag Centraal, not the intercity, but the sprinter). At Vleuten take bus 127 to Kockengen and get off at the ‘Brink’ bus stop in Haarzuilens. From Monday to Saturday the bus departs every hour, on Sundays every two hours (from 12 noon on). It is a 15-minute walk to the castle from the bus stop. It’s about a 60-minute trip in total and the travel costs are about €20 roundtrip.

A student town with a healthy dose of canals, cafes and character, a day trip to Utrecht offers a look into life in Holland that’s laid-back and breezy. One of the most unique sights in Utrecht is the old wharfs along the main Oudegracht canal that have been transformed into cafes wither waterside terraces. People come here to wander around the old city center and take a look at the big Dom Church that was destroyed by a storm in the 1600s. It also has budget hotel options if you want to stay outside of Amsterdam.

At night the cafes bring out the dinner menus with Dutch classics like fish and steak tartar. Check the music listings at Tivoli too, a five-room concert venue that pulls in impressive and popular acts of all genres.

Getting There: Take a train from Amsterdam Centraal to Utrecht Central Station. It’s about a 20-minute train ride and the cost is €18 roundtrip.