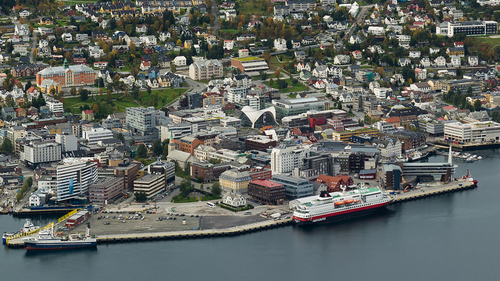 There’s a reason that so many European magazines and newspapers were buzzing a few years ago in 2014 about the Northern Lights. And I was lucky enough to witness what is known as the solar maximum, a peak in activity in the sun’s 11-year cycle.

But if you don’t have two weeks to hang out at a farmhouse in northern Finland and want to maximize your likelihood of viewing the Northern Lights, Tromsø is an ideal base. Low-cost airline Norwegian even flies direct to Tromsø from London Gatwick four times per week. My one-way fare was only 660 NOK ($73 at the time of purchase.) I returned via Stockholm on SAS.

The center of Tromsø offers a few affordable places to stay like Smarthotel. Photo: Kim G.

On the ground, the high-cost index means that you’ll never forget that you’re in Norway. But there is relief. I found a “smartroom” at Smarthotel, a Norwegian hotel chain that opened a Tromsø outpost in 2013. A “smartroom” is tiny (7 square meters) but cute. I enjoyed the simplicity of the space: brushed concrete walls, a bed alcove tucked along with a window and a little bathroom. Those seven square meters felt much bigger than they were. And with breakfast, my room was one of the very cheapest on offer in all of Tromsø.

Search for hotels in Tromsø.

Exploring during the day

Northern Lights excursions leave in the evening, which means that days will be free for exploring. The first stop for many is the Polar Museum, the best-known museum in the city. The Polar Museum includes exhibits on Fridtjof Nansen, polar bears, Norwegian polar expeditions and Wanny Woldstad, the first female hunter in the Norwegian Arctic territory of Svalbard. Admission is 70 NOK.

But honestly, the Polar Museum is not the best museum in town. It is informative, no question, but it feels a bit dated and claustrophobic. Perspektivet Museum, on the other hand, is a sheer pleasure to visit — and free to enter, to boot. They have rotating exhibits but a lovely tribute to Norwegian writer Cora Sandel is also on permanent display. A few blocks away, the Art Museum of Northern Norway is also free to enter, with permanent collections devoted to Norwegian art from the early 19th Century onwards. The permanent collection prioritizes artworks that address Northern Norway.

The Arctic Cathedral is an architectural highlight of Tromsø. Photo: Augusto M.

Museums aside, it is the soaring modernist Arctic Cathedral (admission 50 NOK) that is to my mind the city’s star attraction. Designed by Norwegian architect Jan Inge Holvig, it is located in the neighborhood of Tromsdalen across the sound from the city center. Aluminum-coated concrete panels give the building its dramatic form; on the inside, these panels illuminate the interior in a glowing peek-a-boo. The cathedral is ambitious, grand, and welcoming.

Tromsø’s 24-hour public bus pass is a great value for visitors planning to do any running around. It’s 100 NOK; the bus pass begins to pay for itself after two rides. (A one-way bus journey costs 50 NOK.) The Northern Lights just outside of Tromsø. Photo: Lars T

If you’re lucky, you’ll see the Northern Lights, and when you do you’ll have no doubt who runs the show. But even if you don’t, Tromsø has real autumn and winter appeal. It’s worth a trip to see this unique Norwegian city just to experience its Arctic charm.

Your Tromsø and Northern Lights tips

Have you been to Norway to see this natural wonder? Tell us how you saved on your Arctic adventure!