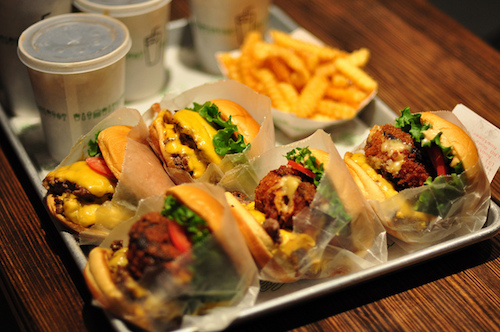 Let’s be honest: Times Square has never been a great place to eat, especially on a budget. Real New Yorkers try to avoid the area altogether.

And for some curious reason, tourists visiting one of the world’s great culinary destinations seem content packing into the same old mediocre chain restaurants they find back home. Applebee’s and Olive Garden in Times Square have become a punchline to locals.

But thankfully, things are changing. Some interesting and affordable tastes are slowly pushing their way into the Theater District, the region focused around Times Square and bounded east to west by Sixth and Eighth avenues (roughly) and north to south by 57th to 40th streets.

More tips for visiting NYC on the cheap:
• How to save on hotels in New York City
• The ultimate cheapo guide for visiting New York
• Cheap hotels in Times Square and the Theater District

How to eat in Times Square on a budget

So if you’ve already scored affordable tickets to a Broadway show, where can you eat for cheap? It all depends on what you’re looking for. Here are a few suggestions for cheap eats in Times Square.

Renowned restaurateur, Danny Meyer, transformed a hot dog cart into the first Shake Shack a few blocks downtown at Madison Square Park and never looked back. Though it evolved into a chain with more than 250 locations around the world (and counting), this is one of the pioneering locations. And it’s as good as ever.

For the record, I’m particularly fond of Shake Shack. It’s not unusual to find me huddled over a ShackBurger, fries and house-made lemonade for breakfast at that original location, which opens earlier than the Theater District Shack. Though their crispy chicken sandwiches and hot dogs receive acclaim, Shake Shack is all about burgers and their signature beef blend. The crinkle-cut fries may sound pedestrian, but they’re prepared perfectly. The lemonade is fresh and tart.

Shake Shack has a fair number of seats, but the lines get really long, winding through a short maze indoors before spilling onto Eighth Avenue. Things move fairly quickly, but that only means you’ll playing musical chairs to grab a table unless you arrive soon after opening or during a rare lull during the day.

And here’s a quick tip: Shake Shack concretes — frozen custard mixed with cookies or candy — are great, too. And if all you want are frozen custard, beverages, beer or wine, you can jump into the shorter “C–Line” for quicker service.

Spice up your cheap dinner with hand-ripped noodles from Xi’an Famous. Photo: bionicgrrrl

You can find a great burger in most cities, but not fresh, handmade noodles. And that’s what draws New Yorkers to Xi’an Famous Foods. From its initial, hole-in-the-wall location in the basement of a Queens shopping mall, Xi’an’s fiery noodles leaped across the river to Manhattan’s Chinatown and then engulfed the entire island.

Head to one of the two nearby locations for “hand-ripped” noodles served in dishes and soups with combinations of vegetables and meats. There’s also a selection of dumplings and what Xi’an calls “burgers” — shredded meat on a bun.

What you want is the Spicy Cumin Lamb Noodles — or, if you’ve got to eat and walk, the Spicy Cumin Lamb Burger. (Xi’an warns that noodles are made to be eaten quickly, right out of the kitchen.) But if lamb isn’t on your agenda, the Liang Pi Cold Skin Noodles, Stewed Pork Burger, and Spicy and Tingly Beef Noodles round out their top five sellers.

Now for some tips: Since the family-owned and operated restaurants are surrounded by towering office buildings, they all get slammed during the lunch and dinner rushes. Your wait will be shorter if you can visit between 2 and 6 pm or on weekends. Also, spicy means spicy. Xi’an Famous Foods draws its name and family recipes from a city in northwestern China known for dishes kindled with cumin, chili, and peppercorns, and this is the real deal. But everything is made to order; so, if you want a milder version, just ask. 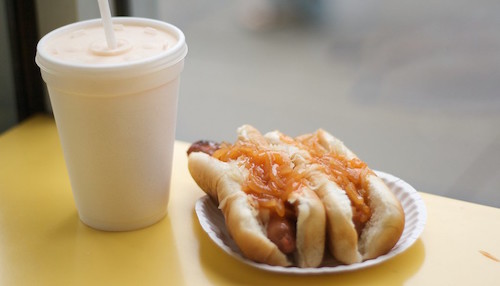 Gray’s Papaya on 8th Avenue is always ready to serve you a hot dog. Photo: David

New Yorkers are busy. And, so it appears, always running late. Which makes hot dogs the perfect, cheapo food: a portable meal you can eat on the run, and one you can find everywhere.

Let’s start by debunking one myth: Food carts are not the dicey proposition many visitors believe. In fact, they’re a staple for many locals and some even serve gourmet specialties. So, you’re rarely more than a block away from a credible New York dog.

But there are a few legendary versions, and one of them is Gray’s Papaya. What sets it apart? It’s always open. It’s very good. And it’s cheap. In fact, Gray’s Papaya is famous for its “Recession Special,” two hot dogs and a medium drink for about six bucks. In Midtown Manhattan, you can’t do better than that.

It’s called Gray’s Papaya because papaya is one of their featured, non-alcoholic tropical beverages, but maybe not the best. I prefer piña colada, though they also serve coconut and banana — along with pineapple juice, soda, coffee, tea and hot chocolate.

One example of the upscale food cart trend is The Halal Guys, which began as a single cart in the Theater District and rode demand from Muslim taxi drivers to become an international restaurant phenomenon. Their original offering is also their most popular — a combo platter of chicken and beef gyro over rice. They serve both types of meat and a pretty good falafel in platters and as sandwiches on pita, with a choice of toppings.

Then there are the sauces. Unless you enjoy playing with fire, ease into the hot sauce, which registers 115,000 on the Scoville spicy-heat scale. (Most jalapeños come in well under 10,000.) And their tangy white sauce is so popular it has its own following.

With plenty of hardcore fans in a busy section of the city, the carts along 53rd Street are not hard to find: Just look for a long line of New Yorkers from every ethnicity, background, and culture. But don’t be scared off by the crowd. Hop right in and meet some new friends. Things move pretty quickly.

A sampling of goodies from Empanada Mama. Photo: Facebook

Granted, this cheapo favorite is officially in Hell’s Kitchen, a block beyond the Theater District’s official boundaries, but this small gem is close to some Broadway venues and worth the short walk.

Touting “big flavors in small packages,” Empanada Mama features, well, empanadas — stuffed pastries, most fried, some baked, that are staples in many Latin American regions. There are about 40 empanadas on the main menu, under $4 each, with both traditional and not-so-traditional tastes.

In the mood for something traditional? Try Brasil, with ground beef, olives, sautéed onion, and potato, or Desayuno Colombiano, with Colombian pork sausage, cheddar cheese, eggs and Spanish onion. Prefer fusion? Consider El Ruben, with shredded beef, sauerkraut, Russian dressing and Swiss cheese, or Pepperoni Pizza, with pepperoni, tomato sauce, and cheese. The variety is impressive and spills over to a small dessert menu with empanadas stuffed with fruit, cheese, and chocolate.

Like many New York restaurants, Empanada Mama has a compact — no, make that tiny — dining room, so be ready to wait if you arrive at prime time.

Grab a slice before a show at NY Pizza Suprema. Photo: Adam Kuban

Pizza: Here’s Where It Gets Tricky

Pizza is the iconic NYC cheap eat. And there’s no shortage of storefronts peddling crust topped with tomato sauce and cheese. You can probably find one of those on every block. Maybe two. Or three.

What you won’t find in the Theater District is the kind of great slice joints scattered in neighborhoods around the city. Why? I dunno. Send me your theories. But I suspect it has to do with rents and that whole “tourists-content-at-Olive Garden” thing.

If you want pizza immediately before or after a show, your best bet is John’s of Times Square, a notable restaurant preparing traditional New York pies (no slices) in an 800-degree, coal-fired oven — along with a full menu of pasta, sandwiches, and dessert. But it may be known better for its setting in an abandoned church, complete with a stunning stained glass ceiling, which, to be honest, is pretty cool.

But I prefer to venture nine blocks outside the Theater District to NY Pizza Suprema, praised by many and rated by the “Slice Harvester” website as New York City’s best slice. Their regular cheese pizza is memorable. So are the Margherita and white slices. My advice? Go with whatever looks good — it will be — but be ready to order when it’s your turn and keep things moving.

City Kitchen is a fancy (but not expensive) food court in Times Square. Photo: Facebook

If you can’t decide: City Kitchen

If your group’s already arguing about where to eat — or perhaps you’re arguing with yourself! — your best bet is City Kitchen, located at the Row NYC Hotel. When you enter what’s billed as “A Times Square Food Market” you’ll find a busy room ringed by upscale food stalls.

Whatever you choose, don’t miss Dough, an outpost for one of the city’s great doughnut shops. Their rotating menu includes unexpected flavors like hibiscus and passion fruit. A couple of my favorites — Nutella and dulce de leche — are also often available.

Your tips for Times Square

Where do you like to eat for cheap when you’re in Times Square? Let us know in the comments!