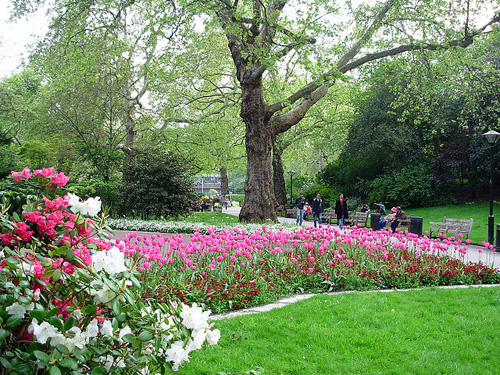 Thanks to EuroCheapo correspondents across Europe, we now know that all Parisians aren’t the height of chic, and that Barcelona isn’t full of sangria-guzzling locals. Now it’s time to leap on the next Eurostar to debunk a few London travel myths.

Like many places, London has many popular misconceptions about it. We’re debunking the top eight London travel myths, with additional travel tips along the way, to make your next trip the best (and most budget-friendly!) it can be.

The first unveiled truth in our list of London travel myths is that Londoners aren’t rude. Of course, London can be a frantic city, with so many people rushing to get to places and seemingly no regard for the lone, lost tourist in their way. Or what’s perhaps more spooky: the ghostly silence on a rush-hour tube as nobody speaks to each other, despite being pushed closer to each other than you’d probably want to get with your best friend. Like Paris, we’re a mixed bunch of people, but the average Londoner is usually more than happy to help if asked.

And we’re shy. We’ve got that reputation for a stiff upper lip for a reason. Strike up a conversation, and chances are we’ll join in—we’re just waiting to be asked.

On the other hand, decades of period dramas have given us a reputation for politeness that we perhaps don’t deserve. Admittedly, it can be hard to work out when we’re being rude, as it’s hidden under so many levels of niceties, unfathomable to anyone who is not British born and bred. But we’re used to no one understanding us: learn to play the rules, and you’ll get along just fine.

That includes, if you crash into someone with your rucksack by accident and they say they’re sorry, that’s your cue to apologize profusely. And do remember to get on our right side, literally, by obeying the “stand on the right/walk on the left” rule on tube escalators. You’ll soon be embraced like you’re one of our own (i.e. we’ll happily ignore you).

Sure, London is a city, but there are more places to escape than you think, like St. James Park. Photo: Jayaprakash R

Well, there’s undeniable truth in this one. But with a population of around 8.3 million (compared to 2.21 million in Paris and just under 800,000 in Amsterdam), what would you expect? You can, however, do yourself some favors in how you approach the city. Visit around British holidays—Christmas, Easter, the “Bank holiday” weekends at the beginning and end of May—and you’ll find a much calmer city: basically because a large number of London residents use the time to leave town.

If that isn’t an option, be savvy about when you move about the city. Why squeeze yourself onto a Tube full of grumpy office workers at 8 a.m. or 6 p.m., if you’ve got the freedom to travel later? And there are plenty of opportunities to seek out some quiet spots in the city, such as its many beautiful, peaceful parks. In fact, there’s an entire book devoted to “quiet London”.

The Tube can be quick, but it’s not always your best option to get around town. Especially with such an expensive fare. Photo: Phil Ostroff

4. The Tube is the best way to get around London

Speaking of the Tube, it’s undoubtedly an easy and convenient way to get across the city. But it’s not the best way to see the city for many reasons. The first is in that word “see”: Exploring London is much more fun if you can see the sights when walking, taking a bus, or perhaps using one of the “Boris bikes”.

The second reason is that, with the exception of taxis, it’s the priciest way to see London (a single fare in zone one is £4.70 without an Oyster card, compared to £2.40 on a bus).

Finally, it’s often not the quickest way to get about in central London—the Tube from Covent Garden to Leicester Square takes nine minutes, compared to only two minutes if you walk it.

Not all of London’s iconic art rests in museums. Case in point: this piece by Banksy. Photo: DigitalParadox

5. You must visit the Tower of London and London Eye

You really don’t. London is a large city, and it’s an old city. It’s stuffed full of attractions, where you could merrily spend your time and money, not to mention the hundreds of nice cafes, bars and shops that keep its residents happy and amused.

Instead of seeing “the sights”, seek out what really interests you instead: whether it’s Charles Dickens, street art or an overstuffed walrus. London has got something for every taste. Have fun exploring that, rather than standing in line for hours to get a glimpse of a wax Princess Kate (unless wax really is your thing…).

Some of the most brilliant museums in the world call London home. And many, like the British Museum, will cost you absolutely nothing to get in. Photo: Chris Robinson

Another London travel myth is how costly it is to travel here. Sure, it can be: transport and entrance fees all add up. Not to mention accommodations, if you don’t stick to our suggested affordable hotels.

But there are ways to make it cheaper: London has some great street food to keep you full and in pocket (check out our market guide for starters). We’re also immensely proud that so much of our culture is free: You can walk straight into Britain’s most popular tourist attraction, the British Museum, and soak up thousands of years of history without paying a penny. Same goes for the National Gallery, the Natural History Museum, the V&A, the Science Museum and many more. (Here’s our full list of free museums to help you plan ahead). Visit London and you can come back smarter, and not necessarily that much poorer in the process.

Like this street scene in Shoreditch, today’s London is a contrast of old and new living together side by side. Photo: Kaustav B

7. Londoners are either cockneys or lords of the manor

Perhaps sadly for us all, London no longer represent a scene from Mary Poppins. The cliché of the salt of the earth cockneys, compared to the upper crust gents living in their grand piles, simply no longer applies (if it ever did).

London is astonishing for its mix of people and cultures and how it welcomes people from all over the world. And, perhaps compared to a city such as Paris, how it all exists right alongside each other: old and new, rich and poor. Traditionally cockney areas of East London are now home to some of the most fashionable restaurants in town, as well as more long-standing traditional businesses. This invigorating blend is one of the reasons why visiting London can be so supercalifragilisticexpialidocious.

Londoners love a good football game, but not everyone is obsessed or out for a scrum. Photo: bamberry

8. It’s a city of football hooligans

There’s no better time than now to try and understand the always hopeful/always-prepared-to-be-disappointed English footballing psyche. Football will be dominating the screens of our pubs and clubs, and there are plenty of ways to get involved in a relatively civilized manner. We’ll even allow you to cheer for your own team (as long as they aren’t playing England, obviously).